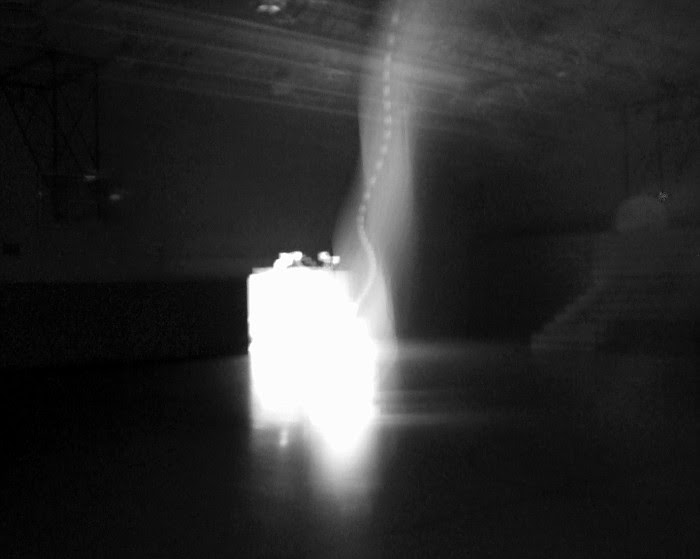 From the 3/1/2009 folder of the Fujifilm camera, although it was taken 2/28/2009. I posted this a year ago, never got any kind of response to it. To post it today I decided to desaturate it and that's when the swirling "contrail" showed up, which has me totally baffled as to what it could be if not something paranormal. More info on the photo at the link above.
Day*60

Update:
I was able to re-create this using the same camera in the same place. Using Night Snapshot or a similarly named setting on your digital camera... when you take the picture and the flash fires, it is NOT done taking the picture. In this setting, the camera fires a flash to light up your subject, such as your friend you are photographing, then it exposes a little longer to 'light up' the background. Usually after the flash, we lower the camera, as the picture has been taken. However, when we do that in night snapshot mode, any point of light now moves across the frame while the pic is still being taken. That's what caused this picture. Here are some of the ones I took purposely to recreate this effect:

Not paranormal after all, unfortunately.
at 1:44 AM

Email ThisBlogThis!Share to TwitterShare to FacebookShare to Pinterest
Labels: black and white, FujiFilm A820, paranormal

My belief: a projection of light energy.

the bead like image is the statement of such projection... (Jung association) the umbilical is attached to the baby and the baby is the image captured through the lens.

Thanks for the comments. See the update!