I went on a little hike at Pratt's Farm. It was around noonish though so I had to cut it short and get home and ready for work. At one point I took a side path up a hill and I think I startled something...was thinking it might have been one or more coyotes but I never saw anything. I heard a weird noise, not quite a bark...not sure how to describe it...almost like a startled grunt, and a rustling in the trees. It was an area of thick pines, so visibility was nil. So the rest of my hike I kept looking back and taking pictures behind me. I felt like maybe I was being watched. Nothing showing up in any of the photos so far though.
Note: A friend told me deer will make a grunt noise when startled...as will bears, but we have no bears here as far as I know. lol 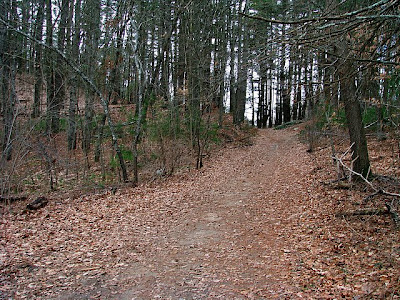