The Freetown/Fall River State Forest is one of the corners of the Bridgewater Triangle. If you're not familiar with that, the BT is an area defined many years ago that is known for a higher than normal occurence of reports of paranormal actiivity. Not just ghosts but anything paranormal - UFO, cryptozoological, hauntings, cult activity (not exactly paranormal but may be a contributor)...you name it. So of course, that's what drew me to it. My friend who is "sensitive" says she feels sick when she drives by it.
It looks like a nice place and I think I might camp there sometime. Not much to see right now of course, in the middle of January, but this poster caught my attention. It was posted in May and maybe the horse was found and they just didn't take the sign down. If that's not the case...well, how sad is that. Poor horse, and poor owners. 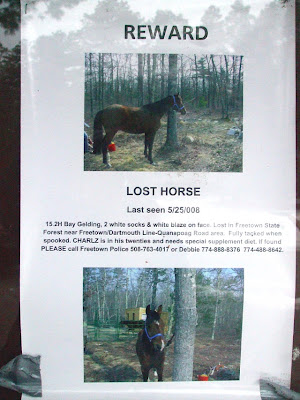 It said the horse was spooked, but I wonder by what.
Before I left I was sitting in my car checking the road map and a ramp truck went by heading out of the park, with a PU truck on the back. The top middle of the truck's windshield was smashed...wondered what happened there. Maybe it's not such a nice place. lol
at 11:24 AM

Oh, that's creepy! I hope the horse is ok!